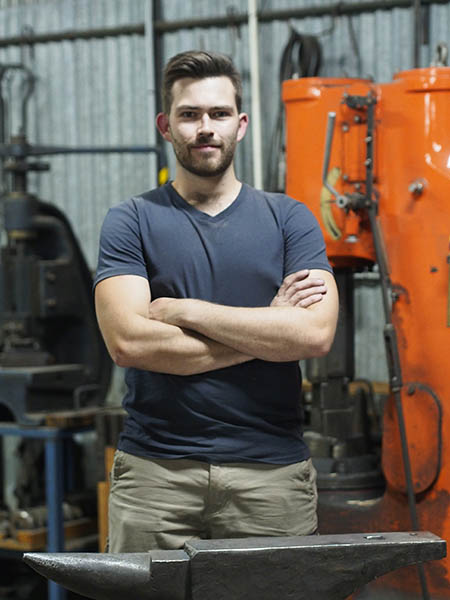 Brad became engrossed with blacksmithing whilst studying Forensics at Uni. He was at an event hosted by the Society for Creative Anachronism and was taken with the idea of procuring some armour and getting involved. Being a hands-on person, Brad learnt by doing and made his own set of armour. Before he knew it he was hooked on blacksmithing.

He has always been drawn to creating elaborate work with intricate details. Asides from the intellectual and engineering challenges, he enjoys the reward of imbuing his work with a sense of provenance and connection to the past. Brad does this by making most of his work from reclaimed materials sourced from swap meets, paddocks, and scrap.

Brad teaches many of our blacksmithing courses, including Camp Axes and Decorative Blacksmithing. He finds teaching quite exciting; most of the time he is passing on his skills to people who have never swung a hammer at a piece of hot steel before, and he gets a real thrill from watching them achieve amazing things.