The team of teachers at the Tharwa Valley Forge bring a wide range of experiences to the courses. They are selected not just for their technical skills, but also for their people skills. To be encouraging, patient, flexible and passionate make our teachers more effective in introducing students to our art and to get a great result.

Dave has been coaxing bows from saplings, trees and lumber since he was 14. Starting with simple branches and small saplings strung with baling twine, Dave soon yearned for a more authentic savage's experience.

Dave sought out the writings of bowyers past and present, such as Adrian Elliot Hodgkins and the modern champions - Tim Baker, Jim Hamm and the like. With this newfound knowledge, Dave was able to make much more efficient bows for the target butts and for the hunt.

After moving from the bush to the city, Dave began using milled timber in place of standing trees. At about the same time, Dave discovered that with the application of clever and complex formulae and technical drawings, bow design and performance could be enhanced to a much higher standard.

Dave has worked as a semi-professional bowyer at times, and still takes commissions on occasion. His bows have been sent as far as Townsville to Hobart, and Perth to Sydney. Dave has started teaching the art of bowyery so as to share the skills, experience and joy of crafting primal wooden bows able to compete with modern fibreglass productions with pride and authority.

Seeking to broaden his horizons, James undertook work experience at Tharwa Valley Forge. His creativity and skill caught the eye of Karim, leading James to move to Canberra to pursue a career as an Artisan.

Having studied Metal Arts at TAFE, James is a skilled fabricator that has made everything from practical everyday items such as seating and work benches, through to art installations of his own design.

James is now an Assistant Cutler at Tharwa Valley Forge and is developing into a skilled Bladesmith. He makes production knives and cutlery at the Forge, and assists with the conduct of courses. In addition to loving his job, James is very happy to have access to a comprehensive workshop where he can continue to grow as a creator and knife maker. 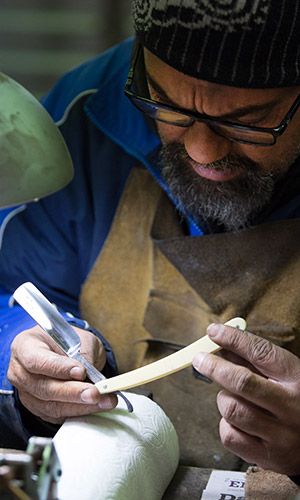 Dean was hooked on Tharwa Valley Forge from the very first moment he took a course here. He went from helping tidy up and setup classes in exchange for workshop time to making his own blades. One day six years ago, Karim challenged Dean to make two razors - something Dean had never tried before. Using Karim's knowledge and conducting his own research, Dean designed and made two razors using Damascus Steel and Buffalo Horn.

Dean saw that no-one else was making razors in Australia; although many knifemakers try making razors at least once, no one was doing it with any regularity. He decided to challenge himself to learn all he could about razor making, and has since become the largest razor maker in Australia. He now makes handmade custom designed razors in both traditional Japanese and Western styles.

As his reputation began to spread by word of mouth, Dean was sought out by clients seeking restoration of their heirloom razors. He is frequently called upon by clients from around the world to restore cut throat razors that have been passed down through generations. His unique skill set combined with the top of the line equipment at Tharwa Valley Forge ensures that his restorations are second to none.

Dean has taught over 40 Razor Making Courses so far at Tharwa Valley Forge and says that he finds people who attend his razor making course have two main concerns: "how do I keep my razor sharp?", and "how do I use a razor without cutting myself?" Because of this, Dean's courses not only cover the practical elements of razor making, but also cover the correct use and maintenance of razors, including exploration of elements of razor design such as edge geometry and symetrical versus asymmetrical hollow ground blades.